Training for managers under pressure

Crucial skills for getting the best out of others

Join thousands of participants getting results

"A very intimate training which will make anyone reflect on how best to engage with colleagues when confronted with difficult situations".
- Fundraising Officer, United Nations High Commission for Refugees (UNHCR)

"An unbelievable experience, highly motivating training and one of the few which stays forever in your mind.  A tangible impact to your life and working environment, and a great self-awareness wake-up call.  The thing I like most is the very simple approach that I can't forget but only want to practise more and more.  It was truly an investment in my success!"
- Senior Engineer, Qualcomm

Ready to Get Started?

After that, if you’d like to take a deeper dive and explore how you can personally make best use of these skills, I’m offering you a FREE initial coaching session to help you assess whether this training can help you become really good at dealing with people, especially in the situations you are currently finding hardest to handle successfully.

Proven training that gives managers, leaders and professionals the exact steps you need to confidently manage upwards and convincingly reassure your boss

Is this the right training course for you?

Is this the right training course for you?

Are you stressed and worried about how creating the right impression?

Arrange a free initial coaching session and develop your ability to reassure the boss quickly!

Listen to a discussion about how to deal with difficult people
e.g. a difficult or demanding boss 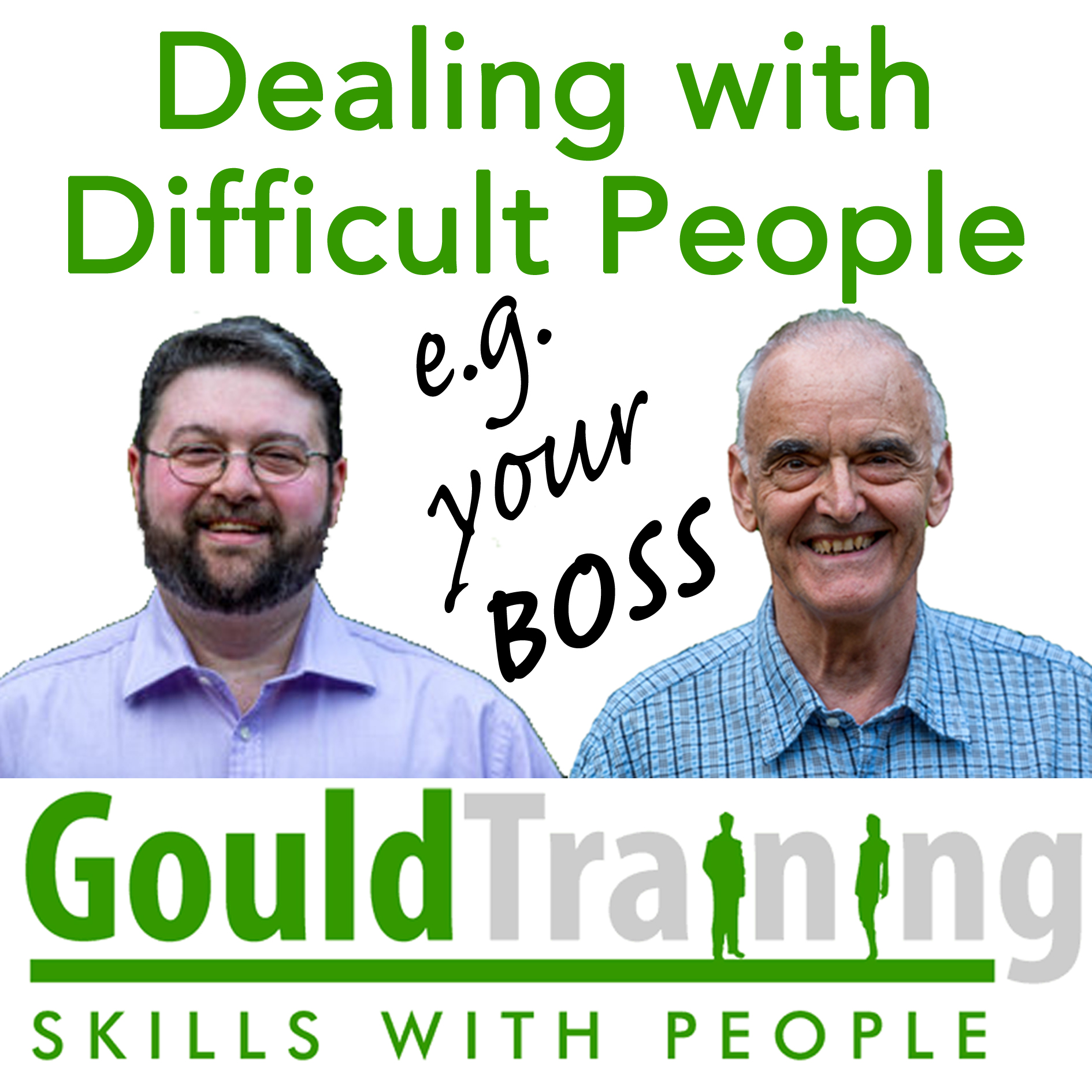 What you'll take away from this course

Might your need to be more successful at managing upwards be met by this management training course called Skills with People?

This course offers a simple but powerful set of skills with a very wide range of uses when managing upwards.  Specifically;-

Are you a manager, leader or a professional looking to nurture your reputation?

Arrange a free initial coaching session and we'll show you how - now!

A practical guide - How to manage upwards

A practical guide - How to manage upwards

How emotional intelligence can help you manage upwards more successfully

There are two crucial skills you need for managing upwards successfully. One is listening with empathy. The other is speaking assertively. We'll help you master both of them on this course. Here are some examples of situations where these two skills can help you be much more successful at managing upwards.

Example 1 - Getting a busy person's attention

When people are busy it can be difficult for them to switch from what they're doing and pay attention to you. Here are two approaches, the first without, and the second with empathy and assertiveness (empathy and assertiveness are the two core skills taught on the Skills with People course). Imagine the BUSY PERSON in this conversation is your boss:-

First approach - without the two skills

Yes, he has agreed – but reluctantly, and you therefore have only half his attention. The other half is still on the report he's writing. He's understandably on the defensive, protecting his time from your intrusion. That's because you appear to be aware only of your own needs. You showed no awareness of or concern for his needs, you gave him no time to let off steam and mentally adjust, and you weren't honest about how much of his time you needed.

Now when he is ready you're much more likely to have his full attention.

Summary of the method

A combination of these two skills is so powerful and hard to resist that it works irrespective of the relative status of the person you're dealing with.  It's a very effective way of managing upwards.

Example 2  Saying what you want

Many of us learn very early in life that it's unfair, rude, and perhaps punishable to ask for what we want, because it might clash with or deprive someone else of what they want. This may have been part of the necessary and well-meant social training provided by our carers when we were little. But many of us have taken it to mean that it's safer to keep quiet about what we want, and this has become one of the underlying beliefs that have shaped our personality, our relationships, and the way we handle our bosses. In order to avoid conflict we've acquired the habit of suppressing one of the most vital and empowering questions we can ever ask: “What do I want?”

But that early lesson in life was wrong. Provided we also consider what others want, asserting what we want usually works very well. Saying what we want does not mean we are insisting on it. It simply means we are putting it on the table for discussion. If there's a clash of needs, we can either discuss how to divide up the limited resource, or – even better – create a way to both have what we want. Provided our aim is to satisfy one-another’s needs as much as our own there's no conflict and the conversation can be harmonious. This works as well with bosses as with anyone else.

This robust but harmonious way of negotiating about what we want is made possible by using empathy and assertiveness together.  Using this approach in the conversation with your boss, you'd say:-

He's very likely enjoy your frank approach and allow you to try. From this point onwards the main skill you need is not beating him over the head with the advantages of your idea, but showing how well you can understand his reservations, in other words, listening with empathy. If you can satisfy him you understand his reservations, and allow him to let off steam about them, he'll begin to be receptive to your idea.

Example 3. Receiving criticism without being defensive

Most people experience criticism as a personal attack even when it's not meant that way, and have a strong instinct to defend themselves. This is the hardest of all situations to handle gracefully. But reacting in a defensive way to criticism always raises the tension, because it fails to take the criticiser’s underlying concern seriously, and therefore makes him feel even worse about you. It therefore diminishes you in his eyes. An un-defensive response, on the other hand, has the opposite effect. It increases your stature in his eyes and enhances the relationship. And far from showing submission, it actually shows strength.

Another thing to bear in mind is that much of the criticism you receive is false. A common reason why is given below. An understanding of this can help you stand firm and not submit to it. What you need is a way of being firm yet un-defensive in the face of false criticism. This might sound like a lot to ask for, but, as we'll see shortly, a combination of empathy and assertiveness places it within your grasp.

Of course some of the criticism you receive probably is true, and you need a graceful way of responding to this, too. You also need to be able to tell the difference between true and false criticism.

Imagine someone senior in the hierarchy says to you`;-

Which of us, on receiving this, would not experience a rapid increase in blood pressure?  Not only is it a heavy blow to our self-esteem, but it also threatens our reputation and career prospects.

But hold on.  If instead of panicking we examine it closely we can see in it a number of very interesting things:-

But although seeing negative personal criticism for what it really is can help us be less disturbed by it, we still need to respond in an effective way. So let's return to the example and see how we might respond with a combination of empathy and assertiveness:-

Your integrity is intact. You've stood up for yourself under severe attack with both courtesy and grace. You've acquitted yourself well and have gone up in his estimation. What has enabled you to do this is a combination of empathy and assertiveness. Your empathy opened his mind. Your honest assertiveness brought him to his senses.

But what if the criticism you receive is valid?

Of course, if it's skilfully given it won't be so difficult to receive, but if it's given insensitively or aggressively you may still have a problem receiving it without becoming defensive. The example below is of receiving valid criticism undefensively:-

What's the problem about manage upwards?

The underlying problem is fear, and how easily we let it inhibit us.

There are two practical questions here. One is - can you do anything about the fear, apart from honestly admitting it and learning to live with it? The other is - can you learn how to behave in more impressive ways even when you're afraid?

In the Skills with People course we encourage you to focus mainly on the second question. In other words, we help you find impressive ways of dealing with your bosses even when you feel intimidated. Of course as you do this your confidence increases and you begin to feel less afraid, but you don't need confidence to start with.

What not to say to your boss

When your boss asks how things are going, don't say everything's fine if it's not. There are better ways of managing upwards. Imagine what you'd be thinking if you were the boss and received this answer. You'd be thinking, "But can I trust this person - isn't he/she just saying what he/she thinks I want to hear?"  On the Skills with People course we'll coach you in how to speak the truth and be respected for doing so.

For ore information on this website relevant to managing upwards you might also find our pages on feedback, listening skills and personal impact relevant and useful.

See what our customers say

See what our customers say

Why a FREE initial coaching session will help you

Why a FREE initial coaching session will help you

How we've succesfully adapted to Covid

How we've succesfully adapted to Covid

See how this training can be done online - here.